Have you ever dreamed of being in a band, performing on stage in front of a crowd of people chanting your name? The Rock Box Music School & Stage is here to make that dream a reality!

Voted among the Best of North Port every year since opening in 2016, The Rock Box has enrolled over 1,600 students of all ages, and nurtured them into growing musicians specializing in VOICE, PIANO, GUITAR, BASS, DRUMS, UKULELE, MANDOLIN, BANJO, VIOLIN, VIOLA, FIDDLE, CELLO, WORLD PERCUSSION (DJEMBE, CAJON, ETC), TRUMPET, FRENCH HORN, TROMBONE, TUBA, FLUTE, CLARINET, SAXOPHONE, EUPHONIUM, and many other instruments!

“Our experience with The Rock Box has been phenomenal!” says one parent. “We have been through a couple of other schools, but nothing like this. Real musicians that obviously love what they do. True rock stars, and the most down to earth people we have ever met in the business.”

“We’re so much more than just a music school” says Angel Bartolotta, creator, co-owner, and drum teacher of the award-winning Rock Box Music School & Stage. “We give people the chance to live their dreams. We’re laying it all out on the table and putting these opportunities right into the hands of our students, encouraging them to use their talent to reach their goals. I believe in the importance of music education and the performing arts in the local community. The Rock Box allows students to express themselves creatively in a relaxed and enjoyable setting where they can learn teamwork skills and build lifelong friendships.”

“In addition to our private one-on-one music lessons,” Angel continues, “we also host group classes, specialized workshops, field trips, concerts and recitals, our annual Rock With A Cop event, and our monthly Jam Night which is quickly becoming a huge hit with the local community. I’m especially excited about one of our new programs which I call Homeschool Rocks! These are classes and events reserved exclusively for homeschoolers. It’s a great way for them to interact and have fun with other kids their age. These kids wouldn’t normally get this in a traditional homeschool environment.” The Rock Box also specializes in Special Needs & Music Therapy, as well as hosting a weekly radio show on WKDW 97.5 FM (highlighting original music written by our students).

Angel Bartolotta (who is a Certified member of the DW Drums Department of Education, the D’Addario Education Collective, and the National Association of Rudimental Drummers) is no stranger to the music scene, both locally and worldwide. All throughout high school, he performed in local bands in the North Port area. At the age of 19, he ventured out on his first world tour as the drummer for the band Genitorturers (Tampa, FL) playing major cities across The United States, Canada, Germany, France, England, Italy, Switzerland, Denmark, Holland, Austria, Belgium, The Netherlands, Australia, and New Zealand. Solidifying himself in the music business as a “hired gun”, he earned full endorsements from some of the industry’s leading instrument manufacturers and enjoyed success playing drums for the bands Crossbreed (Clearwater, FL), industrial rock pioneers PIG (London, UK), Switched (Cleveland, OH), and punk rock icons The Undead (New York, NY). Angel is most well-known for his time with the band Dope (Chicago, IL) on Epic Records / E1 Entertainment. With Dope, Angel performed on arena tours, radio festivals, and the band received constant airplay on mainstream radio and MTV. Their album “No Regrets” debuted at #88 on the Billboard 200. Angel is also the founder of Team Cybergeist, a collaborative music project featuring over 100 musicians from all around the world. The project combines platinum-selling artists and local musicians, some of which are based right here in SW Florida. Together with his wife Sally (a talented musician who plays guitar, bass, and also sings for Team Cybergeist), they opened The Rock Box Music School & Stage in 2016. It was Angel’s way of giving back to the local scene where his music career began.

Sally Bartolotta, who has been in the music scene since age 13, offers a unique perspective as a female artist. “I started learning guitar at age 13, and was later gifted my first bass at 17 by well-known friend and mentor, Shavo Odadjian of System of a Down.” says Sally. “I instantly fell in love with the power behind bass and would go on to choose this as my outlet in multiple bands including Cherry Debauchery (Washington, DC), PsyKill (Tampa, FL), and Team Cybergeist where I was hired as the live bassist when the project decided to transition to the stage in 2009. I later switched to vocalist in 2014.”

“But it wasn’t always smooth sailing,” Sally explains. “If you noticed the gap in my musical timeline, there is a fundamentally important reason why. With conventional music lessons, you are only shown one side of music. How to make sounds with your instrument. I had no idea what to do with what I was learning. So how does one tackle that elusive transition from playing in your room with some friends, to learning to write songs you’re confident with, and then baring them on stage? I was 25 before I ever set foot on stage, which was with PsyKill. Even though so many of my friends were in world renowned bands, with full tour productions, I still had so many questions, and had no idea how to take that next step. And in the early days, neither did my bandmates. So for many years, we just didn’t. And that’s one of the things The Rock Box is hoping to help up and coming musicians avoid. Whether it’s something as seemingly simple as how to plug into the house sound system at a show, or to actually learn the art of performing itself, we want to nurture all musicians every step of the way, so they can strive to reach their full potential with as few obstacles in their way as possible.”

The Rock Box has been going strong since 2016, and in 2021, they relocated to a larger building on Toledo Blade Blvd! The Rock Box is now a 3,100 square foot facility with 10 private lesson studios, full stage and concert venue, a state-of-the-art recording studio, music video production, a weekly radio show on 97.5 FM, retail store, and music lessons with an award-winning staff of experienced and professional teachers. The Rock Box is definitely the place to be!

“We’re here to strengthen the area’s music scene from the ground up with students of all ages” Angel concludes. “You’re never too young, or too old, to pick up an instrument and rock!” The Rock Box is located at 1123 N Toledo Blade Blvd, North Port, FL 34288 in the Shoppes at North Port plaza (on the corner of Toledo Blade and Price, behind Walgreens and Advance Auto Parts).

Sunday: Closed (except for group classes, workshops, and special events)

* OPEN every weekday holiday except Thanksgiving and Christmas 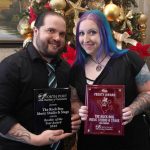 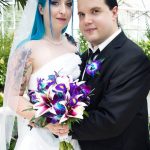 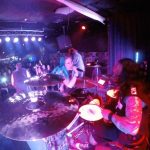 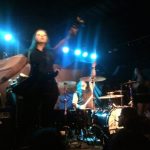 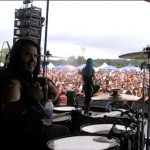 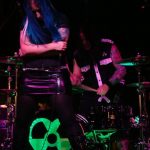 Sally and Angel met in 2001, through their shared passion for music.  Married since 2011, this power duo has tons of shared experience between them, having played, performed, written, and extensively toured together with Team Cybergeist for over a decade.  Opening a music school to offer knowledge and experiences with up and coming musicians is the next step in their natural musical progression.